Why Trump Should Win Tonight's Debate 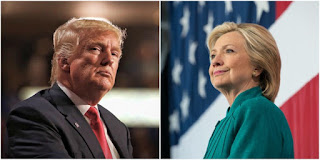 There are several reasons that, barring some major gaffe on Trump's part, he should win the debate tonight with Hillary Clinton.

First, all you have to do to win this kind of debate is exceed expectations. As it stands now, the expectations for Trump's performance are lower than Hillary's, giving him a much lower bar to clear.

Given these realities, Trump's strategy should be purely reactive: If Hillary remains docile, just stand there, make a few policy statements and look presidential, in which case he will have exceeded the expectations. If Hillary goes on the attack, then deploy the email scandal, the Bengazi scandal, the Goldman Sachs connection, and her husband's Bimbo scandal, in which case he will at least neutralized her attacks and possibly draw blood.

That's pretty much a draw. However, Hillary has one more narrative working against her, and it has to do with her health. Up until about a week ago, I thought her health really was a tempest in a teapot that no one really cared about. But I think that I thought that because I didn't care about it. As has become evident, a lot of people do care about it. The video of her collapsing as she got into a car made it an issue.

This debate is supposed to be 90 minutes without commercials. Do they even get a potty break? If not, Hillary has another dilemma: If she drinks water before the debate, then she's going to need one (remember the several times in the primary debates when she disappeared from the set?); if she does not drink water, she faces the problem of dehydration, in which case she faces the problem of passing out again (this was the reason given for collapsing in the now famous video).

Again, Trump doesn't face the same dilemma. If we can go by past experience, he can hold it--and he is more likely to make other people pass out than to do so himself. In fact this is the one thing that could completely change this election: If Hillary collapses or shows any significant evidence of fatigue or physical weakness, this election could well be over.

Finally, even if there is a gaffe, there is going to be an automatic double standards for the candidates that, once again, favors Trump; namely, that Trump can get away with gaffes that Hillary cannot. In fact, gaffes are such a regular part of Trump's rhetorical repertoire that the gaffe is going to have to be a big one in order to be news at all, whereas Hillary will be hurt by even a moderately serious gaffe, since her strength is stability and experience.

And of course this plays back into the expectations game.

Trump has more to gain and less to lose than Hillary, making him the favorite to win.
Posted by Martin Cothran at 5:29 PM 2 comments:

The Subtle Bias of the Courier-Journal Shows Itself Again

I will be commenting on an online story today in the Louisville Courier-Journal today about Fayette County Family Court Judge Tim Philpot's recent remarks critical of same-sex marriage to a religious group over the next couple of days. In the meantime I'll just remark that the dishonesty of the media reaches proportions that are sometimes epically astounding.

The CJ titled the online version of the piece, "Family judge: Gay marriage like 'jumbo shrimp'."

I'd love to attribute the headline to the simple ignorance of the kind I encounter all the time when I use an analogy about a relationship between two things and the person responding just doesn't get the difference between the similarity of two things (which is not what this kind of analogy expresses) and the similarity of two relationships between two pairs of things (which is what this kind of analogy does express).

For example, in a discussion the other day, a person protested my comparison between the idea that you can choose your gender based on your feelings and that you can choose your race based on your feelings. If the latter is unacceptable, then why is the former acceptable? The person's response was: "You cannot try to compare race with ... sexual identity. What you are doing is called a logical fallacy."

And the similarity of these two relationships is unmistakable, which is why someone who is actually male who thinks he is female is just as preposterous (in fact, even more so, since gender goes deeper than race) as Rachel Dolezel, the former chairman of the NAACP who, despite actually being White, claims she is Black because she feels Black—a point not dissimilar to the one Philpot was making.

The fact that people no longer get this is a commentary, not only on the general decline in the ability to think, but in the decline of the ability to think analogically. Maybe this is why the College Board took analogies out of the SAT after years of declining scores in that section.

Philpot did not say that "gay marriage is like jumbo shrimp"; he said “Same sex marriage to me is an oxymoron…kind of like jumbo shrimp." Not only is that a completely different statement, but a true one. The primary argument of those opposed to same-sex marriage is that it violated the very definition of marriage. Philpot's remarks are only another colorful way of making the same point.

Of course, I'm not averse to attributing ignorance to journalists. It abounds. In this case, however, the obfuscation of Philpot's position in the way the headline was written was clearly the result of media bias against anyone who questions the Politically Correct position on gender, which, if you're on the lookout for goofy things, ought to stick out like a sore thumb.

So, while much of the story is quite fair and some of it not entirely unflattering, the CJ (I don't know whether it was Andy Wolfson or an online editor) was clearly banking on peoples' ignorance about how analogies work to distort what Philpot actually said. They also had to know that, however fair much of the story was, the headline is what people will remember.

This is the subtle way that media bias works, and it's a commentary on the integrity of newspapers like the CJ that they do this kind of thing on a regular basis.
Posted by Martin Cothran at 5:15 PM 1 comment: 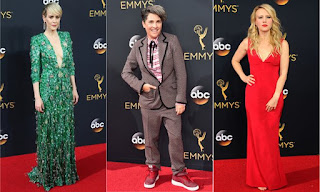 This year's Enemys—er, excuse me, Emmys—reminds me once again that I don't know why we're talking about deporting a bunch of Hispanics. They're hardworking, family-oriented, and, according to statistics, generally stay out of trouble. And they've got an awesome culture that can only enrich our own.

It would make far better sense to talking about deporting the entire Hollywood entertainment caste that, far from enriching our culture, seems bent on degrading it. These people have not only been trivializing and degrading our entertainment media, but systematically dismantling the values this country built on and are now part of the movement promoting the persecution of people who mostly want to be left alone to believe the things they've always believed.

You may say I'm a dreamer, but I'm not the only one.
Posted by Martin Cothran at 11:18 AM No comments:

It's the End of the Conservative World as We Know It

There is one conservative blog (other than, of course, Vital Remnants) that will put the current election in excellent perspective. It is a conservative oasis in the sea of nonsense. It is the Imaginative Conservative. Today's article is a great example of why this online magazine is a light in the conservative darkness. Paul Gottfried, one of the great modern conservative writers reflects on the state of modern conservatism, so-called:

[E]very time I hear the term used to describe a GOP position on just about anything, I have to wonder what makes that position “conservative.” Why for example is nation-building abroad, which involves imposing the latest model of American democracy on populations that are culturally quite different from the present American ruling class, a “conservative” position? And why is letting American working communities languish while our jobs are outsourced a “conservative” policy? The obvious answer is such stands are talking points deployed by the Republican Party as it works to hold on to certain constituents. These stands also happen to be those of the GOP donor base.

... I am convinced that the designation “conservative” is losing any substantive meaning, except for attachment to Republican operatives and donors and the label that particular media personalities choose to give themselves.

In going back and reading Russell Kirk, as I have had the occasion recently of doing, I am reminded once again of how far gone modern so-called conservatism is. Real conservatives are trapped between a presidential candidate and his followers who hold many positions consistent with conservatism but who, when asked to defend them blindly repeat that the want to "Make America Great Again," and establishment Republicans who hold many positions at complete odds with conservatism.

And, worse, both factions have abandoned the long tradition of social conservatism. On Trump's end you get an immigration plan that would only let in people who support the agenda of radical gay rights groups (maybe that's the reason he opposes letting so many Syrian Christians into the country):

Recently he discussed how he would make Muslims entering the United States undergo “extreme vetting,” which would include making sure they had favorable attitudes toward gays and affirmed full gender equality. I’ve no idea why this test is something associated with the Right. It looks like something that came from editorial board of the New York Times or from some other publication that is now attacking Mr. Trump as a fascist.

On the other side you have the New Conservative Establishment, who were waving the white flag on marriage even before the ink on Obergefell had dried:

As Kirk pointed out, conservatives in any time are almost necessarily relegated to the status of a Remnant, and we probably need to embrace that role, which means keeping our powder dry in elections like this one.
Posted by Martin Cothran at 10:11 AM 1 comment:

What are schools for? Good citizenship, job training, or academics? 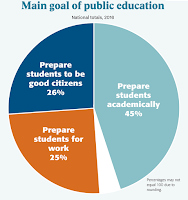 The results are quite interesting. The plurality believes schools are for teaching academics and the majority of parents of school children think the same thing.

Read it here.
Posted by Martin Cothran at 2:38 PM No comments: