The fact that there is liberal bias in the mainstream media is not exactly headline news, nor is the idea that it has been going on a long time. But there is one noticeable difference in the liberal media now as opposed to, say, twenty years ago.

It used to be that reporters saw themselves as unbiased and were just unaware of the attitudes that made their way into their stories. But that pretense has pretty much been abandoned in the Twitter age. Reporters now regularly Tweet their real feelings, and, surprise surprise, they are almost exclusively left in their political orientation.

This manifests itself in a lot of different ways, but one them is to take note of things conservatives do that they say they consider objectionable which they never seem to notice their ideological soulmates doing, despite the fact that they do it as well. To put it bluntly, the rules conservative Republicans are completely different from those for liberal Democrats.

A liberal runs the race without impediment, but as soon as the conservative approaches the hurdle, it is raised a foot or two.

I recently got into a Twitter war with several reporters, one with the Courier-Journal, and two others with the Lexington Herald-Leader, who had tweeted about the infamy of a group supporting Kentucky Gov. Matt Bevin producing a campaign ad assailing Andy Beshear's support for a piece of legislation (the so-called "Equality Act") that would "destroy girls sports" by allowing biological males to compete in women's competition.

Actually two of them tweeted about this. The other just chimed in.

Now there are a number of legitimate ways to attack this ad. You could argue that it makes assertions that are not true. You could question whether it would really "destroy girls sports." You could throw doubt on the fact that the  the "Equality Act" would allow men into women's competition. You could try to undermine the implication that Andy Beshear really supports such a thing.

All that would have been perfectly rational. But what did they do instead? Here was Daniel DeRochers with the Herald-Leader: 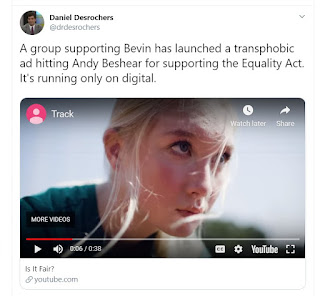 Instead of deploying an actual argument, Desrochers does what most progressives now do, which is engage in virtue-signaling, in this case, by accusing Bevin supporters of being "transphobic."

"Transphobic" is a term made up by gender ideologues who, lacking the integrity to establish their positions rationally, instead invent Devil words to try to scare away anyone who has the temerity to appeal to reality.

It's an invented word designed by ideologues for ideological purposes. It is considered legitimate solely on the grounds that is used so often by all the right people. It's the word you say in order to drive thoughts about the actual biology of the situation from your mind.

To the progressives in the media (as with all progressives), opposition to the kooky assertions of gender ideology is proof of moral turpitude. If you disagree with the fashionable opinions on gender, you are evil. "Transphobia" is not just a disease (soon, surely, to be recognized by the increasingly politically correct medical authorities), it is a moral sickness. It is simply not possible to honestly believe that someone cannot decide what sex they are.

"Transphobia" is a cross that politically correct progressives wave in the face of the evil conservative vampire in order to make him cringe. And it often works when it's done to weakly-constituted Republicans.

Then there was the Courier-Journal's Mandy McLaren: 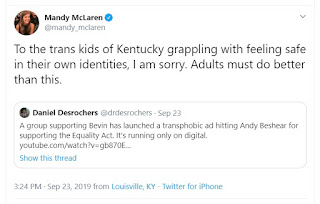 So just taking a position on the unfairness of biological males competing in women's sports constitutes bullying of transgender people?

All this means is that disagreeing with the fashionable opinions of liberals is now considered a thought crime, and is to be dealt with by hurling epithets like "transphobic." Just say the word and all those bigots who don't take their gender ideology medicine scatter.

I asked what, specifically, was wrong with the ad, which was followed shortly by this from Desrochers: 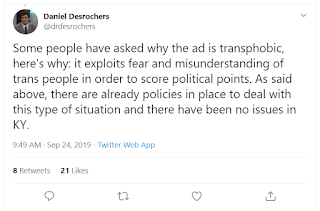 Well, first of all, there is no explanation of how the ad "exploits fear and misunderstanding of trans people." The ad just expresses opposition to biological males competing in women's athletic events, and calls attention to the fact (undisputed by Desrochers and McLaren) that Andy Beshear supports a bill that would (again undisputed) encourage or mandate this. Again is the mere opposition to such a thing bigotry? Is Martina Navratolova, who has called this practice "insane," a bigot? And even if it did, is it any more egregious a moral act than calling people "transphobic," as if they have some kind of psychological disease?

Let me just say this: I don't think Desrochers even believes any of this. Virtue-signaling is inherently disingenuous, which is just a way of saying that the people who do it really don't mean it. It's one of those perfunctory gestures you are expected to make when you are a political reporter at a liberal newspaper, which accounts for the weak defense he put up for it when I challenged him.

Note that he pairs the "fear and misunderstanding" charge, which he doesn't even try to justify (and for which there is really no case to be made anyway) with "in order to score political points." Scoring political points in a campaign ad? How shocking and unusual.

Is there a politician somewhere who doesn't do this? Again, this is just hand-waving. But somehow combining one charge that makes no sense with another charge that is virtually meaningless, we're supposed to think that it is a meaningful statement.

The real crime is to believe that boys are boys and girls are girls. In a world now apparently run by crazed professors out of some Womens' and Gender Studies department somewhere, this is a hanging offense.

Of course, the Twitter comments of McLaren and Desrochers are flatly partisan, showing, as I said before, that the partisan masks are off. But we're still supposed to believe that their reporting is objective.

It's not impossible, of course, but its getting harder and harder to believe.

And finally, let's just observe that any stick is good enough to beat a conservative gubernatorial candidate with. If there were a liberal Democrat running who took the side of the women who have complained about the unfairness, nothing would have been said.

That's how it works in places like the Herald and the Courier. And it's one of the reasons they have become largely irrelevant.