When the Kentucky Supreme Court rendered its decision on the controversial case of the state's new pension law, the results were predictable: The (largely) Republican proponents of the pension bill assailed it and the (largely) Democratic opponents hailed it.

As with most such things, it's a lot more complicated than that. In fact, both sides were wrong in major elements of their reactions.

The Republican Reaction
The Republicans argued that the decision was flawed and that it was some kind of power grab by the Court. It wasn't. To argue that the doctrine of separation of powers prohibits the Court from finding the General Assembly's actions unconstitutional is simply silly. In fact, the decision was quite correct in its conclusion that the General Assembly erred by violating the state constitution's provision that every bill must be read three times before its passage. The title of the bill was read, but the title was the title to the original version of SB 151, a sewer bill.

It inartful to say the least. But opponents of the bill characterized this as somehow malicious. It wasn't. Republican leaders were trying to get the bill through before the end of the session and they gutted another bill in order to do that. Democratic opponents of the law and their cheering section in the media cried their crocodile tears, but they were well aware that their own party has done this many times--and no tears were shed in those cases, nor was there any media outrage.

Pension bill advocates were trying to do the right thing and they did, they just did it the wrong way--a way that has been used many times in our legislature. In fact, I'm thinking there are lawyers out there searching the records to find out all the other laws we have passed this way that are now vulnerable to court challenge.

But in regard to the decision, the Court did what conservatives are always asking courts to do: Not to make policy, not to be a super-legislature, not to be activist, but simply to interpret the clear language of the Constitution.

What does the Constitution say? "Every bill shall be read at length on three different days in each House." (Section 46) Boom.

Why the Court Was Right
The court was right. As the majority decision declared:

... we agree that the mode chosen by the General Assembly to "read" a bill passes constitutional muster, we are constrained to the conclusion that SB 151, as finally enacted, never received such readings in either legislative chamber.

The Court said that, whatever else was the case, reading a title having to do with sewer legislation did not meet the criterion of "read in full." Again, the majority opinion:

The words "SB 151" were, indeed, "read" three times but the title read along with that designation each time was "AN ACT relating to the local provision of wastewater services." Although read only by title, the title by which SB 151 was read never had any connection with the subject matter of the measure enacted: "AN ACT relating to retirement," nor did it connote any information to signify that the act related to public pensions or the retirement benefits of public employees. Nothing in the utterance of the bill's numerical designation, SB 151, conveyed any information that the reading was related to a pension reform bill. The title as read in each chamber pertained to the local wastewater services measure that was discarded.

There is simply no disputing this. It didn't happen. Yes, everyone knew what bill they were voting on, whatever the title it bore. But the Constitution is the Constitution.

One Problem with the Decision
The only problem with the majority of the decision is that, if you read Section 46 literally, as they had to read it in order to overturn the pension bill, then no bill passed in the last session of the General Assembly in the last session or any session prior to it (unless you go back about a hundred years) was really read "in full." The only thing read is the bill's title. So, if we're getting picky, which the Court has to do to justify its ruling, then every piece of legislation passed in recent times is subject to being stricken down on Constitutional grounds.

The majority opinion clearly recognizes this, since it goes to Byzantine lengths to justify ignoring the full import of the language. After doing the Pepto Bismol dance for about three paragraphs, the opinion states:

We are satisfied that the common legislative practice of reading only the title of the bill and electronically publishing simultaneously the full text of the bill to the electronic legislative journal available on every legislator's desk satisfies the constitutional mandate of§ 46.

Oh, really? The problem with that just a few paragraphs later it rejects the identical argument from the state that gutting a bill and passing it under an incorrect title is common practice in the General Assembly. In almost thirty years of observing the Legisature, I have seen it time and again.

Is there a net you can make with holes small enough to capture bills read with the wrong titles but large enough to let through bills that are not, in fact, read "in full?" Probably. Gutless decisions can still be correct. But still, it weakens its rhetorical and judicial force. If you're going to use plain language to justify your ruling, you shouldn't equivocate on it elsewhere.

And if this sounds nit-picky, read Justice Vanmeter's concurring opinion, which makes just this point:

The primary concern advanced in this case is that the three-day readings requirement of§ 46 was not followed. I agree with that conclusion, but I also note other constitutional requirements regarding reading at length seemingly were not complied with either. "Reading by title" does not equate to "reading at length" as required by §§ 46 and 56. The Senate sessions are televised and are readily available through the Legislative Research Commission's website. Senate Bill 151, in its original form relating to the provision of local waste water services, purportedly had its first reading on March 12, 2018. It appears not to have been read at length. Are the plain provisions of our Constitution mandatory, or not?

Either be nit-picky or don't be nit-picky. But to do it one part of a sentence and not another looks like special pleading of a sort.

Would the result of observing the literal meaning of the Constitution in this context result in absurdity, as the Court says? Maybe. But Justice Vanmeter has a solution (different from the Court's, which was to fudge):

A better solution to the concern that the exigencies of modern society make reading at length impractical is that contained within the Kentucky Constitution: amendment.

The Reaction by Pension Bill Opponents Was What We Have Come to Expect
Meanwhile the opponents of the pension bill, made up in large part by the credulous hordes commanded by the KEA and led by Attorney General Andy Beshear, made it sound as if the decision somehow implicated the content of the legislation, and, of course, it did nothing of the kind. The Court's objection was purely procedural. It had nothing to do with whether it was good or bad policy.

They also put on their outrage against a General Assembly that would (prepare yourself) pass important legislation by bending the rules. Um, ever heard of KERA? Where were these defenders of good government when the House physically stopped the hands of the clock in the chambers so they could, by violating the rules, pass the bill?

"[W"hy can’t Republicans govern openly and honestly? said Tom Eblen of the Lexington Herald-Leader. "[W]hy can’t they follow normal rules and procedures for enacting laws?" Really, Tom? Like the Democrats always did? Do you miss Greg Stumbo, the great paragon of political probity? Where do you hide your outrage when its the Dems do these things? Is it hard to do? Do you feel bad about it afterwards?

The fact remains that our pension system is both horribly underfunded and antiquated in its design. When I worked in employee benefits in the 1980s, defined benefit plans were already largely a thing of the past and the ones that remained were being phased out in private companies. But state governments like Kentucky, always trying to catch up with the trends of the previous century (just take a look at their websites), marched contentedly on.

The pension law struck down by the court was flawed in the process of its passage, but it was about the best course available. In fact, the Republicans ought to be congratulated for dispensing with the practice of kicking the can down the road of their Democratic predecessors and being willing to take the political hits for doing the right thing.

And the Governor's decision to call a special session of the General Assembly to pass the bill? Good for him. It was swift and decisive. And, given that it comes near the holidays means we won't have ill-informed people shouting insults from the back of the room at legislators trying to do their work (as happened in at least one hearing I saw).

No one can argue now, after several months of discussion about the pension bill, that passing it now is rushed. We've talked plenty about it. Now do it, with three readings, please.

Posted by Martin Cothran at 9:47 PM No comments:

Schools should be teaching history, not protesting it 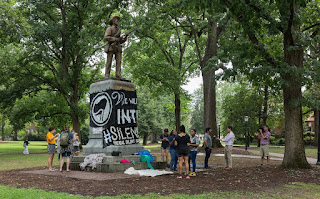 
A number of teachers at the University of North Carolina-Chapel Hill have pledged to withhold more than 2,000 grades in protest over the university's plans to house "Silent Sam" in a separate on-campus building. Silent Sam is a statue of a Confederate soldier that stood in the quad at the university until students illegally toppled it earlier this year.


... Any faculty or student protester wanting to participate in the desecration of historical monuments should have to take a history test.
When student or faculty mobs begin to gather on the green of a college or university, and indicate by their mindless chants and sloganeering that they wish to take down a monument, and when college administrators (not the most resolute or principled people) begin to experience anxiety and cowardice in the face of established rules of behavior, there should be a team of people ready to run out on the green with portable tables, pencils, and test forms.


... You can't topple the statue until you pass the test.


Read the rest here.
Posted by Martin Cothran at 9:18 PM No comments: