So let me get this straight: The Democrats--who supported exactly the same immigration policies during the Obama administration and who have been pushing for open borders (a policy which even the U. S. House, which they run, has not passed) and telling the world of their intentions to provide free medical care to all immigrants and thereby issuing a global invitation for people to come here--are upset that conditions at border detention facilities are overcrowded.
Posted by Martin Cothran at 4:39 PM 2 comments:

Email ThisBlogThis!Share to TwitterShare to FacebookShare to Pinterest
Labels: Immigration

When Did We Give Up On Human Beings? Another example of how computers are making us stupid 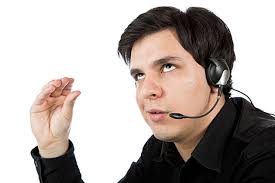 Our genius educrats have somehow gotten the idea into their heads that computers are going to help them to educate children. In fact, a few of them want to replace teachers with machines (check out Larry Cuban's books). But in reality, computers do little to make us smarter and a whole lot to make us more stupid.

I have many examples of this, but today's lesson in how computers are sucking our brains out involves trying to make a reservation at a hotel.

I have a conference I am supposed to attend in the coming weeks and I am not sure whether a reservation for me has already been made by our conference person, who I can't reach on the weekend. So, this morning, I call the hotel to ask if I already have a reservation in my name so that, if not, I can go ahead and make one.

Now this is a simple logical procedure. Admittedly, I have written three logic textbooks, so I have an understandable advantage in being able to think about how this should go:

But this is overcomplicating things because ALL I NEED TO KNOW IS WHETHER I ALREADY HAVE A RESERVATION AND IF NOT I NEED A ROOM.

So I call the hotel, and a person answers. Ha ha, just joking. Of course it is not even conceivable that that could happen and, instead of a person answering, I get an answering system with five options, none of which exactly fits my situation. But I remain confident that if I can outwit the phone system and talk to a real person he or she can simply look my name up an see if it is already on the system and, if not make a reservation for me.

Finally I get to a point where I can press '0' to talk to an operator. I press the button, and an actual human being answers. I tell her what I need. See if you can find any reservation on the system and if there is not one there, then sign me up.

And here is where things begin to gets Kafkaesque.

I have to go through a battery of questions, none of which is relevant. "Can you provide me your confirmation number sir?"

"Okay sir, so when will be your arrival date?" I give her a date. She asks me to confirm it. "The departure date sir?" I give her the date. She asks me to confirm it again. "And what's the purpose of the stay sir?" I tell her. I remind her that I am not sure I am not already in the system, and if so, all these questions are irrelevant and could she please just search my name to see if it is not already there.

"Okay, sir, so how many rooms and adults?"

"Uh, one," I say, despondently. She confirms.

"Can I have your name, sir?" I tell her, now with some hope that we might be getting the crux of the issue--THAT I MAY ALREADY HAVE A RESERVATION. She asks how it is spelled.

"Okay, sir, are you a Hilton Honors member?" Now we're back to square one. I ask again about whether I am already on the system so we don't have to go through all this. But it is as if I never said anything and I am confronted with another question.

It dawns on me that this operator is not only not hearing me, but is not aware of my actual existence. She does not recognize me as a fellow human. She is not cognizant of my being-in-the-world. She is, in fact, not aware of any other important concepts that the German philosopher Martin Heidegger attempted to capture in terms with way too many hyphens. She does not acknowledge me other than as a voice on the other end of the line which is feeding her information that must be converted into data that must be typed onto the keyboard and transmitted to some central system somewhere that is controlling this evil hotel.

I quickly try to think, what can I say that will help me escape from this surreal vortex? "If ~P, then Q and if P, then ~Q," I say, thinking this may be language the Master Computer behind all this will understand. But no. Even logic does not fit into the algorithm. The voice on the other end simply asks the next question in the sequence.

Finally, realizing that this call could go on for days without a resolution of the thing that needs to be resolved, I say, "Ma'am, I think it might be easier if I just try to see if I can contact the person that normally handles my convention arrangements."

"Okay sir. Is there anything else I can do for you?" I consider suggesting that she take the red pill and escape the Matrix, but then think better of it.

I eventually just conclude that it is unlikely I am already registered at the hotel, take a chance and manage, on another inordinately long call, to simply schedule a reservation.

Now I realize that a lot of people will read this and think that this is no big deal. This is just the way it is. And maybe I am just getting old and curmudgeonly (a reality which I long ago embraced), but are we really that far gone? When did we give up on simple things like judgment?

This is not an insignificant question. When did we give up on human beings?

I'm sure some people would laugh now at the section in Plato's dialogue Phaedrus about Socrates' warnings about the invention of the technology of writing: that, rather than increasing knowledge and wisdom, it would do precisely the opposite. But I'm totally on board with this idea. And if writing only threatened to do this, more sophisticated modern computer technologies have closed the deal.

I'm sure the people on the other end of calls like these are nice people just doing their jobs. But the process in the context of which they were no more important than some random circuit in the computer they were wired into apparently excluded them from making simple judgments that would have cut through all the technological nonsense.

Human beings don't need an algorithm to operate, and even when they need to do something that requires a procedure, they can abandon the procedure at any point at will. A computer does not have an algorithm that allows it to escape the algorithm, but humans do.

The people who think that we can replace teachers with computers by sitting whole classrooms of children down at Chromebooks to be taught (yes, this is actually happening in public schools, and on a large scale)--that, in other words, teachers can be replaced by computers--need to find another line of work.

The only thing such an education will be able to produce is a bunch of socially-challenged button pushers who can follow a script, but can't make simple judgments about basic things.

The public school policymakers who blather on about "critical thinking skills" and think that somehow computers are going to help in this process need to employ a little critical thinking themselves, and I'm not confident they know how to do that.

A Review of Patrick Deneen's Why Liberalism Failed, Part I 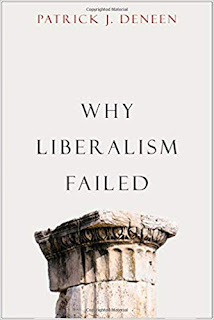 Patrick Deneen's new book, Why Liberalism Failed, has caused a bit of a stir, largely because it implicates thinking of those on both sides of the political spectrum on the problem of what is wrong with our culture. It won't make those who call themselves conservatives happy and it won't make those who call themselves liberals happy either. And the reason for this is that conservatism—at that strain of conservatism that fashions itself "libertarian"--shares the same basic assumption as the liberals.

The difference between liberals and libertarians—as I have said many times—is only three or four letters.

In fact the reason I'm blogging on it now, is my recent Twitter exchange with Andrew Walker, the former Baptist ELRC director who recently left that organization to return here to Kentucky to take a position with his alma mater, Southern Baptist Theological Seminary. Andrew and I worked together as lobbyists several years ago, and so we know each other well. I took the opportunity of yanking his chain about a tweet with an endorsement (and link) to Paul D. Miller's "Against 'Conservative Democracy'," an article which was remarkable largely for its lack of insightfulness. I see he has since redeemed himself by tweeting a link to the far more insightful thinker, the British philosopher Roger Scruton, even though what Scruton says and what Miller says are quite different, if not completely inconsistent.

Anyway, it prompted me to ahead and start on Deneen's book, which I will be reviewing in several posts over the next week or so.

Deneen takes an admittedly hard line against our twin liberalisms, one espoused by Democratic progressives and the other espoused by people who call themselves conservatives but whose thought bears little similarity to the thought of Edmund Burke and T. S. Eliot, the thinkers between whom Russell Kirk sandwiched the history of conservatism in what remains the greatest book about conservatism yet written: The Conservative Mind from Burke to Eliot. Most people who call themselves conservatives in the United States, in fact, are no different in their fundamental assumptions about politics--a prominent theme of Deneen's book.

The central tenet of the book is that liberalism is immolating itself in the flame of "freedom" and more liberalism will just feed the fire. The problems with liberalism are inherent in its very nature, and cannot therefore be solved by anything within liberalism. "Liberalism," he says, "has failed—not because it fell short, but because it was true to itself." The "ruins it has produced are the signs of its very success."

The aspect of this book that I suspect will be most suspect—at least among conservatives—is the implications of his analysis for America itself. America "is the first nation founded by the explicit embrace of liberal philosophy, whose citizenry is shaped almost entirely by its commitment and vision."

According to Deneen, what we are seeing now in what all sides of the political spectrum recognize as, if not a crisis, at least a problem, is the breakdown of an ideology, and the kind of breakdown common to all ideologies:

Among the few iron laws of politics, few seem more unbreakable than the ultimate unsustainability of ideology in politics. Ideology fails for two reasons—first, because it is based on a falsehood about human nature, and hence can't help but fail; and second, because as those falsehoods become more evident, the gap grows between what the ideology claims and the live experience of human beings under its domain until the regime loses legitimacy.

Deneen argues that this is indeed what is happening: Liberalism is based on a false view of human nature and now in a crisis of confidence in politics, economics, education, and science and technology.

Suffice it to say for now that the book is about not just the failure of liberalism and the inevitability of that failure, but also about the nature of true conservatism.