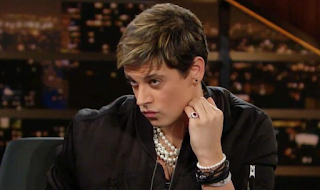 After just having invited Milo Yiannopoulos to speak at its annual conference, it was revealed that right-wing gay provacateur had publicly defended sex between adolescents and older men.

Within twenty-four hours of CPAC inviting him, he was dis-invited. Now the only pearls you'll see worn at CPAC will be worn by women ...

Read the rest here.
Posted by Martin Cothran at 11:32 PM No comments: